How Reactance Affects Your Decisions and 5 Ways to Overcome It

Do you remember the last time someone tried to tell you what to do? If you’re anything like me, your gut reaction is to do the opposite. Not necessarily because you disagree, but because you don’t want decisions being made for you.

This psychological phenomenon of reactance is a natural response to concern about losing control and freedom. However, living in a state of reactance will lead you to a life of anger and resistance to ways of thinking that could be in your best interest.

This article will teach you how to overcome reactance to free yourself to make decisions that create the life you desire.

Reactance is the idea that as humans we tend to pick the opposite choice or behavior that someone is trying to get us to pick. We do this because we feel that a person or group is trying to limit our choices or control us in some way.

To put it super simply, reactance is a bias that indicates we generally don’t like to be told what to do.

And it seems that the more the person tries to convince us that their way is the best way, the more we resist.

Not that I have ever behaved in this way. Although my parents may rat me out on this one.

What are examples of reactance?

Some of my favorite examples of reactance stem from my teenage days. If there is one group of people who have reactance mastered, it’s definitely angsty teens.

I remember being told by my parents not to date until I was 16. They gave me a long list of reasons why I was not mature enough to handle the dating scene at that age.

I could generally understand some of their points and they seemed reasonable. But because they were telling me not to do it, I felt more encouraged to do it. I didn’t like that they were the ones determining my maturity level or freedom.

So of course I started dating when I was 15 years old. And you can imagine how that story ended.

Unfortunately, reactance is not just limited to teenagers though. All you have to do is look at today’s political scene to have a front-row seat to the reactance show.

Just try to make a suggestion regarding how to vote for a person in either political party. You can make a sound logical argument and point out loads of evidence supporting your opinion.

However, the harder you try to convince a person, the more inclined they are to not listen to you and do the opposite. This seems particularly true if you’re of the opposite political party.

The reality is reactance is indeed a reaction we all innately have as a part of our psychological make-up.

But that doesn’t mean we have to be driven by it.

In 1966, Brehm first coined the term reactance theory to describe this psychological phenomenon. Since then, there have been many studies demonstrating the validity of his theory.

So while no one will argue that reactance exists in humans, it does seem to vary how much it affects each one of us.

It appears the more your country values freedom of choice the more potential you have to react to that freedom not being in your own hands.

Research has also found that the stronger the delivery of the message, the more likely you are to experience reactance. When testing out a “stop texting and driving” campaign, the researchers discovered students experienced greater reactance to campaigns with a stronger persuasive message.

How does reactance affect your mental health?

If you allow reactance to control your decisions in life, you may be headed down a less than happy path.

Research has found that high levels of reactance correspond with increased anger and negative thoughts.

It makes sense when you think about it. Let’s recall the start of the article when I asked you to think about the last time someone told you what to do. How did that make you feel?

It tends to make you feel angry and frustrated with the person telling you what to do. And nothing good ever stems from anger and negative thinking.

This happens to me at work from time to time. My boss will essentially tell me what to do about a certain patient case scenario without ever asking for my input.

My general reaction to this is one of anger and annoyance. And then I want to not do what he told me to do because it makes me assume he doesn’t trust my clinical decision-making.

Now, that’s not a mature reaction, I’ll admit it. But if I’m being honest, it does happen.

That’s why it’s important to know the active steps you can take before letting this cognitive bias direct your life and mood.

If you’re ready to learn how to combat reactance so you can be in the driver's seat of your life choices, then buckle up. These 5 tips will teach you how to do just that!

1. Think before you act

Let’s look back at my work dilemma from before. When my boss tries to tell me what to do with a patient, it’s true that my first response is to not do what he says.

And if I always reacted to that first response, I can guarantee you I would not be acting in the patient’s best interest.

I have taught myself to first identify that I am experiencing resistance to what is being told to me. When I feel resistance, my next step is to ask myself what are all the possible options in this situation.

I try to put on my scientist goggles and consider every option from an evidence-based view. This includes looking at my boss’ suggestions.

After I’ve gone through this process, I can then make a decision because I know I am acting from a space of logic that has the patient’s best interest in mind.

More often than not, your first reaction of opposition to a suggestion needs to be re-examined. Place your reaction under a microscope before putting it into action.

When someone tries to strongly persuade me to act a certain way, I have this tendency to want to stop listening. And this is my downfall.

When you stop listening to what the person is saying, you may be making assumptions about their motivations. And these assumptions are often incorrect because you don’t listen to their whole point of view.

And beyond that, you may find that with active listening to their perspective you learn something that changes your mind.

So when you find yourself in a state of reactance, challenge yourself to keep listening instead of spacing out. If nothing else, it helps you practice the skill of listening to things you disagree with.

3. Find ways to keep your cool

As mentioned earlier, reactance is often associated with the emotion of anger. When we have this desire to rebel against what we’re being told, we usually act from a place of being upset.

I remember being a part of a group in PT school where we were designing a business together. There was one person in the group who wanted to control every decision and action of the members.

I found myself getting irritated by constantly being told what I was going to do instead of having a say in the project. However, the person who was doing all the directing was a good friend of mine who I liked.

This was when I learned how to keep my cool in these situations. I didn’t want to forsake our friendship just because I wanted to get mad about a group project.

In that case, I taught myself to count to 10 before giving a reply about an assignment in the group. By the count of ten, I usually could calmly communicate my thoughts. Or by that time, I realized that opposing her train of thought really wasn’t worth all the drama.

Find a way to cool yourself down when you find yourself experiencing reactance. It’s rare that your best decisions are made from a state of anger.

This one took me a while to implement. And to be transparent, this tip is still very much a work in progress for me.

But one of the best things you can do to combat reactance is to get curious. I want you to get curious about why you feel such strong resistance to a suggestion or persuasive argument.

When you get curious, you open up yourself to understand what’s really underlying your reaction.

Maybe it’s not that you disagree with the person, but you feel as though you’ve never had control in your life. Or maybe it’s that you have a problem with wanting to control everything and everyone.

This is where things get vulnerable. But getting curious about your own reactance can help you heal deep wounds. And this allows you to then make informed decisions from a place of peace instead.

This is also where I would suggest seeking external help in the form of a coach or therapist. Because if you are experiencing reactance in all areas of your life, it may be time to do some deep work.

5. Have an open conversation

This tip may not be everyone’s cup of tea, but I guarantee you’ll save yourself some trouble if you use it.

When you find yourself wanting to do the opposite of what someone tells you, it’s time to communicate your needs. By telling the person how you’re feeling, it helps them understand your reaction. And it helps both of you better navigate similar interactions in the future.

I remember I used to do this thing where I would tell my husband to take the trash out now. I never understood why he would get so upset about me asking him to do a chore that takes a few minutes.

This simple conversation helped me communicate more effectively because I realized it wasn’t that he didn’t want to help. He wanted the freedom to do it when it worked best in his schedule that day.

Communicate with the person telling you what to do or think. You may just find they are a lot more understanding of your perspective than you realize.

People will always want to tell you what to do. It’s human nature. Using the tips from this article, you can overcome your gut instinct to rebel and give in to the reactance bias. Because while you can’t control what people tell you to do, you can control your response. And that is where happiness can be found.

When did you last experience a feeling of reactance, where you wanted to shoot down someone else's suggestion purely because you needed to resist outside control? I'd love to hear from you in the comments below!

Physical therapist, writer, and outdoor enthusiast from Arizona. Self-proclaimed dark chocolate addict and full-time adrenaline junkie. Obsessed with my dog and depending on the day my husband, too.

5 Tips to Be More Sympathetic (and Why It's Important!)
7 Tips to Change Your Mind to Be Happy (With Examples!) 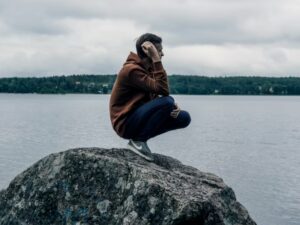 5 Tips to Stop Blaming Yourself (and Practice Self-Compassion)