5 Tips to Deal With (and Recognize) Fake People

They say we should keep our friends closer and our enemies closer, and fake people certainly follow this rule. But the more we hang out with fake people, the more we become fake ourselves. And then perhaps we are the ones who ignite fakeness in others. So how can we best deal with fake people?

It's important to know what causes someone to be "fake". Fake people do not have our best interests at heart. because there may be jealousy and resentment at play. And they often lack the support and encouragement from their friends. Fake people center the world around themselves in a vain and attention-seeking manner.

This article will discuss what it means to be fake. We will also outline 5 effective ways to deal with people to maximize your happiness.

What does it mean to be fake?

A fake person is someone whose words and actions to your face do not match what they say and how they behave behind your back.

In fact, their words may also be contrary to their behavior. Another term for this is someone who is two-faced.

Another way to consider what it means to be fake is to think of the opposite of someone that is authentic. Someone who is inauthentic may contort themselves to win over the approval of others. This behavior manifests itself as adopting the likes and interests of other people instead of following their hearts.

I'm not proud of it, but I've been fake before, and I'm sure you have too. But the important thing is that I recognized my behavior and noticed that it did not make me happy or comfortable inside. And as I realized this, I was able to change it.

In a friendship, fake friends can have a devastating impact on our well-being. Fake friends are more likely to:

If we feel we can not be ourselves around someone and have to behave or dress a particular way to fit in, that is likely a sign that a person is fake.

The dangerous thing is that it encourages us to be fake ourselves.

When we change ourselves to fit in with people who don't value us for who we are, we end up in one big melting pot of fakeness. And we all know our happiness is optimum when we live with authenticity.

Examples of fake people and how to spot them

Let's first consider social media. The influencer industry is worth a considerable amount of money. But how many of these influencers are authentic?

For instance, I've heard of the odd vegan influencer eating meat and dairy in their "real" life. Or the person who sings the praises of a product, pretending it's a life changer - only to detest it in reality.

The issue with these types of influencers, businesses, and people is we lose faith. Their insincerity costs them our trust. Once our trust is gone, it isn't easy to get it back.

If you are wondering how to sign a fake person, here are some telltale signs:

So, if you have people in your life that match several of these traits, the chances are they are fake.

5 ways to deal with fake people

As we have already identified, we are all susceptible to being fake from time to time. Sometimes our propensity to be fake comes from a desperate need to fit in and be accepted. Other times it is due to our need to be seen as "the best." Whatever the reason behind fakeness, a commonality is underlying insecurity.

Let's try and meet fake people with compassion instead of judgment. This approach doesn't mean you have to endure them.

Here are 5 ways to deal with fake people.

When dealing with fake people, focus on yourself first.

Fake people may only contact you when it suits them or if there is something in it for them. Learn to recognize this and only give as much as you can spare. Do not sacrifice your health and well-being for someone who would never help you in your hour of need.

This approach doesn't mean you can't be friends or acquaintances, but learn to say "no" if needed and don't be made to feel guilty. Limit your interaction and pick and choose when you engage with them.

If you need more tips on how to set boundaries, we've got you covered!

Often, people are fake as a result of their own personal issues or traumas. They live in fear of rejection and isolation, so they have developed a constant need for attention and approval.

Considering this, we can learn to view them with compassion instead of frustration.

But don't expect them to open up. Often a fake person is resistant to showing their vulnerabilities and talking openly with emotional intelligence. They may well be crying on the inside while beaming a big pearly white smile on the outside.

It is not your job to "crack" their tough exterior. But be aware that there is often more to a fake person than meets the eye.

3. Do not take their behavior personally

It is not about you.

Fake people often make plans they don't keep or follow up on. It's not personal; they do this to other people as well. One way around this is not to make plans with them if you know they will cancel on you.

The thing is, fake people rarely actually initiate contact. While they love to receive invitations to parties and hangouts - the cooler, the better - they rarely organize this themselves.

So pay attention; if someone isn't checking in with you and actively trying to spend time with you, ask yourself if they are worth your investment.

Oh, the good old-fashioned brown nosers. You know - the people who only chip in when the boss is around. Or the ones who judge others by their standing in society. The same people who hang around the people they perceive to have the most significant street credibility and value.

When I was the Chairperson of a running organization, I had a flock of people always wanting to engage with me. If I posted up in our social media group, I received an abundance of interaction.

This excessive interaction was not lost on me. My status was a light for fake people to flock around like insects.

Luckily, I was always aware of this. I did not succumb to the fake interaction. Although the attention was flattering, it wasn't me they were interested in. They wanted to be seen to be associated with me.

Fake people can be exhausting.

We encounter fake people everywhere we go. There is no escaping them in the workplace, in our extended family, and in our social life. You may not be able to escape your colleagues or family members, but you can end fake friendships.

I understand it can be challenging to end friendships. But it may be time to say goodbye when a friendship becomes fake and based more on a sense of obligation than connection.

Last week I ended a 14-year-old friendship. Nothing about our friendship was real anymore. I appreciate it isn't easy to come away from people we were once very close with. But fake friends cause us stress and compromise our health!

You can end friendships kindly! And in fact, a definitive end to these types of friendships brings closure to all parties involved. If you're wondering how to let go of a friend, here are some actionable tips.

Fakeness in people leads to more fake people. This only results in misery and unhappiness. We hold the power to break this cycle and stop feeding into the perpetuation. It takes courage and strength to deal with fake people, but when we learn how to deal with them effectively, we find more profound peace in our lives.

Do you have any techniques or suggestions for dealing with fake people? We would love to hear from you in the comments below!

Kindness is my superpower. Dogs and nature are my oxygen. Psychology with Sports science graduate. Scottish born and bred. I’ve worked and traveled all over the world. Find me running long distances on the hills and trails.

3 Examples of Optimism: Tips to Become an Optimistic Person 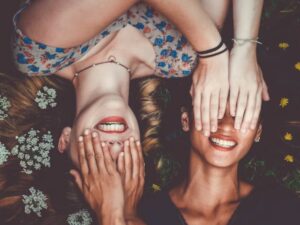