You are here: Home » How To Be Happy » Internal Happiness

How To Improve Self-Awareness: 4 Actionable Methods

Most people like to think that they are self-aware, and to an extent, they are right. After all, it’s hard to function in daily life without it. But at the same time, we aren’t as self-aware as we like to think. But does it matter?

Yes, it does. Self-awareness is the key to understanding yourself and others, and it’s an important part of well-being and day-to-day functioning. There are many reasons why we may be hesitant to grow self-awareness, including the fact that facing yourself honestly can be hurtful, but the benefits outweigh the possible negatives.

If you’re looking to start the new year by becoming more aware of yourself, read on. In this article, I’ll take a look at what self-awareness is and four ways how to improve it.

A significant part of your happiness is a result of your personal outlook. Being aware of your own emotions and mindset is a vital step towards happiness. This is covered in-depth in the section Internal Happiness in the biggest guide on how to be happy available online.

In the most general sense, self-awareness can be defined as the extent to which we are aware of ourselves and how others perceive us.

On the most basic level, self-awareness refers to the ability to distinguish between oneself and others and recognize oneself in the mirror. In a famous experiment, often known as the rouge test or the mirror test, researchers painted a red dot on children’s noses and placed them in front of a mirror.

If the child tries to wipe the red paint off their nose after looking in the mirror, this means that they have recognized themselves. Infants younger than 12 months do not recognize themselves in the mirror and seem to think that the reflection is another child, whereas children above 15 or 20 months of age show signs of self-awareness.

As adults, we have far surpassed the most basic level and deal with meta self-awareness or self-consciousness: not only are we aware of ourselves, but we are aware of how others may perceive us. This type of awareness develops in childhood, too, but seems to be most prevalent in our teens and adulthood: we can become preoccupied with how we appear rather than how we are.

An important part of self-awareness is the realistic and non-judgemental assessment of your resources and abilities. A self-aware person is accepting of their strengths and weaknesses but maintains a growth-oriented mindset.

Why do you need self-awareness

When watching the Netflix documentary Don’t F**k With Cats, I often found myself asking if the amateur online detectives have any self-awareness. It seemed to me that if they had any, they wouldn’t have acted the way they did.

The documentary, which details the case of Luka Magnotta, features interviews with people who tried to catch the killer using only the internet. They detail their frustration with the police who didn’t take their information seriously.

On one hand, I understand the frustration. On the other – what did they expect? They are anonymous people on the internet, obsessively going through YouTube videos frame-by-frame trying to find evidence. None of them had any forensic or legal training.

I reflected on the experience later and I realize that even documentaries use the artistic license to bend the truth so it makes a more compelling narrative. I’m sure that the interviewees are all intelligent, self-aware people in their daily lives, but the way they were depicted in the film made them look like textbook examples of low self-awareness.

That’s one of the reasons why self-awareness is so important – so you don’t end up looking silly in a Netflix documentary. Or, put in a more general and serious way, self-awareness is important because it allows us to assess our abilities realistically and stops us from biting off far more than we can chew.

There are some other positives to self-awareness as well. Psychologist and researcher Anna Sutton determined three main benefits in her 2016 study:

Self-awareness is also simply good for your psychological well-being. For example, a 2010 study found a significant correlation between self-awareness and well-being in mental health professionals, a population with a high risk of burnout.

Furthermore, self-awareness is important in leadership and business, as well. A 2019 study conducted by Green Peak Partners consulting firm and Cornell University researchers showed that a high self-awareness score was the strongest predictor of overall leadership success.

How to improve self-awareness

Self-awareness can be a little bit tricky to gain. It takes some very conscious effort to develop your self-awareness and it’s not always pleasant. For example, becoming more self-aware means that you have to also look at the parts of yourself that you may not like.

However, as I’ve outlined above, self-awareness has many benefits, and building it will be worth your trouble. Here are four tips on how to get started on improving your self-awareness.

Writing down your honest thoughts and ideas is the perfect way to open yourself up for exploration and awareness. The keyword is “honest” and that’s why journaling is one of the best ways to start your self-awareness journey – you can be completely honest in your private journal.

If you’re not into long-winded self-reflections, the easiest type of journaling for self-awareness are different types of trackers. Mood trackers, exercise trackers, water intake trackers, calorie trackers, you name it. We tend to think that we eat healthier than we actually do or that our moods are more stable than they actually are. By tracking our habits, we get a much more objective picture of ourselves.

You can find a comprehensive guide to journaling for self-awareness here.

People like feedback, but we tend to prefer the positive, affirming kind. We tend to be afraid of both giving and receiving “negative” feedback. However, we shouldn’t fear constructive feedback, because it’s one of the best tools for building self-awareness.

If you want to build your self-awareness, pick a couple of people you trust and ask for their feedback. For example, you can ask your partner what they like about you and what they wish you did differently, or a coworker about how they see you as a team member.

There are two things to keep in mind when asking for feedback. Firstly, you may have to remind the person that they should be honest (but constructive). And secondly, try not to get defensive. After all, it’s you who’s seeking feedback. Accept it with grace and take some time to reflect on it.

Mindfulness is all about non-judgemental awareness, so it’s not hard to see why it’s related to self-awareness. In fact, some researchers believe that they are essentially the same thing with only minute differences between the two.

Practicing mindfulness can help you learn how to observe your thoughts and feelings in a calm, honest and accepting manner, which creates a strong base for further self-awareness.

I have written about mindfulness before and you can find a quick guide to get started here.

Take a moment to think about your values. You can probably name the things and ideas that you hold dear, but have you ever explored their meaning? What is your personal “why” in life?

Sit down with a close and trusted person and have a discussion about your values. If you’re not sure where to start, use this or this worksheet from Therapist Aid as a guide. Chances are that you’ll discover something about yourself and become a little more self-aware.

Building self-awareness can be tough, but it also has many benefits, from better leadership skills and psychological well-being to increased self-acceptance. To reap these benefits, you have to be prepared to be honest and put in some conscious effort, but the benefits outweigh the costs. We are always raising awareness of all sorts of causes – from mental health to climate change – but this year, I invite everyone to raise a little self-awareness as well!

Do you have an interesting story to share about self-awareness? Maybe an additional way to improve self-awareness that I missed in this article? I’d love to hear all about it in the comments below! 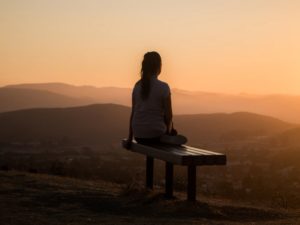 Why Is Meditation So Important? (5 Reasons And Examples)

4 Real Examples Of Materialism (+ How To Be Happier Instead)

How To Be Happy With Who You Are? (4 Actionable Tips)