If there’s one thing everyone on the planet wants to do, it’s to be happy. As it turns out, giving is an excellent way to achieve this.

Of course, being the one receiving money, gifts, or support from others will make us happier in some way. This is usually the very reason why a person would want to give us something in the first place. But those who know the secret behind giving might have a second motive – making themselves happy. There is a lot of scientific evidence that giving in practically any form has enormous benefits for the giver. This includes a happier mood, a greater sense of wellbeing, lower stress levels, lower blood pressure, and even better longevity.

In this article, we’ll explain the science behind why giving makes people happy. We’ll also tell you five easy ways you can give to be a happier person.

This article is part of a much bigger guide on learning how to become happy that I’m sure is the biggest freely available guide on the internet. This article contains some great tips, but you’ll find a lot more actionable tips in the section Happiness Tips!

My personal experience of how giving leads to happiness

When I was a university student, I signed up to volunteer at a senior center. Other teenagers spent their Friday nights working on the next day’s hangover. I rolled senior citizens in squeaky wheelchairs into the center’s lounge. I then spent the next two hours playing an assortment of music for them on the piano.

It’s certainly not the first thing you think of when you hear “teenager’s Friday night.” I’d be lying if I said there weren’t moments when I second-guessed my decision. But then I saw the senior swaying along, clapping, grinning and even complimenting me. That made everything worth it.

The point was to liven up their evening, but I almost feel as if I got the better end of the bargain!

Studies on the effects of giving on happiness

Many studies have examined how giving affects happiness. Here are some of the most important ones.

Study finds giving to others is associated with increased happiness

If someone gave you $5 to spend by the end of the day, do you think you’d be happier spending it on yourself or on someone else? If you’re like most people in the experiment conducted by Dunn, Aknin and Norton in 2008, your answer might sound a little like Michael Buble’s “Nobody But Me”.

But the researchers found the opposite to be true. In the experiment, they approached people on a university campus and offered them either $5 or $20. They told half the people to spend the money on themselves and the other half to spend it on someone else. That evening, those who had spent the money on others said they felt much happier throughout the day than those who had spent it on themselves.

This came as a surprise to a second group of participants in the study. They had predicted that spending money on ourselves is what would make us happiest. They also assumed that levels of happiness would increase along with the money spent. But thankfully for our wallets, there was no difference in happiness whether people spent $20 or $5.

It’s easy to give when you have a lot to begin with – but what if you barely had enough for yourself?

The study described above was conducted on a university campus in North America. The probability of finding people there with a good quality of life is very high. If the study had been conducted in a developing country, would the findings have been the same?

A group of researchers had this very question. They conducted experiments across the globe to look for a universal link between giving and happiness.

In short, they found overwhelming evidence that giving leads to happiness. The giver’s cultural background, social status, or financial situation made no difference. This held true for 120 out of 136 countries surveyed. They also got the same results across very different countries:

Another important question is whether giving makes young children happy, too. If this wasn’t the case, its effect on happiness might be just a positive association learned through education and culture.

Well, when there’s a question in science, there’s a study looking for answers.

Of course, money means nothing to a two-year-old (except maybe something to chew on). So researchers used puppets and treats instead. They created various scenarios:

The scientists coded the children’s happiness. Again, they found the same results. Children were happiest when they sacrificed their own resources to give to others.

Clearly, the evidence shows that giving creates happiness nearly universally. You can start using this to improve your wellbeing as early as today – but how exactly should you give?

Here are 5 ways that prove giving can increase your happiness.

Donating money is one of the first things that pops into mind when people hear the words “giving back.” And as the evidence confirms, this is an excellent way to make yourself happier.

Making donations to charity activates the reward center of the brain. This suggests that it is inherently rewarding. Maybe now you’ll know what to do with that unexpected bonus at work!

But you might wonder if having a selfish aim ruins the benefits of donating. Shouldn’t it be done just for the sake of helping those in need? You’d be right. In fact, donating makes us happiest when we can choose whether we want to donate. In another study, “people experienced happier moods when they gave more money away – but only if they had a choice about how much to give.”

So before you pull out your checkbook, make sure that you’re giving from the heart and not because you’re “supposed to”. But there’s no need to feel guilty if one of your reasons to donate is your own happiness.

After all, happier people tend to give more. So by becoming happier, you are also becoming a more generous person who will continue to do more good. And at the end of the day, a charity gets a valuable donation, and you get more happiness – if that’s not a win-win, what is?

Here are some specific ways to give to charities:

2. Give help and support to friends and family

Giving doesn’t always mean spending money. Time, help, and support are three excellent ways to give that don’t cost a single cent. These, too, have shown drastic benefits to health and happiness.

Giving social support to others brings us many long-term benefits:

Elderly couples who give practical support to others even have a decreased risk of dying. It’s interesting to note that receiving support from others doesn’t reduce the risk of death.

Would you actively try to be more supportive if it also meant being healthy and happy? There are endless ways to do it, so have a look around you and use your creativity!

Here are some ways to support others in order to increase your happiness:

Volunteering is an excellent way to give that boosts your happiness. There is overwhelming evidence supporting this claim. The best example could be the study conducted by United Healthcare published in 2017.

This study found that 93% of people who volunteered over the previous year felt happier as a result. The study also found that of all the respondents who had spent time volunteering:

Several studies found similar results for both the younger and older generations.

Here are examples of how you can volunteer to benefit your own happiness:

4. Give back to the environment

Giving is usually directed at other people, but what if you’re not in the mood to socialize? No problem – the environment is another great recipient.

Even without giving anything, spending just two hours per week in nature has a myriad of excellent health benefits:

But you can do one better and give the environment a little help while you’re there. Environmental volunteers have much fewer depressive symptoms after volunteering.

The environment is in dire need of love, so there are possibilities abound for this kind of giving, both in and out of nature.

Here are some ways to help the environment for greater happiness:

Here is another article of ours that discusses how sustainability and happiness are linked.

5. Give to the world at large

If you’re stuck on ideas for how to give and be happy, rest assured that it doesn’t need to be sophisticated or special. Basically, any act that makes you a better person and the world a better place will do.

A study compared the effects of performing two different types of acts of kindness:

Both types of acts had the same happiness-enhancing effects. They also had a much greater impact on happiness than doing acts of kindness for oneself.

“World kindness” can be a little tricky to define. If you’re trying to do something nice for anyone – or even no one in particular – you’re on the right track. Here is an article dedicated to always choosing kindness.

If you’re looking for specific examples on how to give happiness in general, here are some examples:

Giving can make you happy. Over 50 studies have already shown that giving has positive effects on happiness. You are not only working to make yourself a happier person but also making others happier.  Ultimately, you create a happier world for everyone.

Now I want to hear from you! Do you know any stories that show giving happiness to others improves your own happiness as well? I’d love to hear about it in the comments below!

Born in Slovakia, raised in Canada. Online English teacher, editor, copywriter, and translator. You’ll find me holed up in a bookstore, typing in a cafe, or immersed in a philosophical debate.

What Matters Most in Life? This Answer Will Surprise You!

10 Reasons to be Happy: Can You Guess Them All?

25 Ways to Make Someone Happy 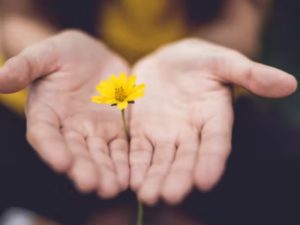 Everyone gets a little insecure at times – and t

Most people worry about the future at some point i

Most people like to think that they are self-aware

Life is perfect when everything is just the way yo