Welcome to the second and last month of my young life in Kuwait. I was working as an engineer on a huge project and my life suffered because of it. In this Monthly Happiness Report, I will detail just how much it impacted my happiness. Let’s get going!

My monthly happiness had already started to decrease after November, 2014, but it reached it lowest point in February 2015. I traveled to Kuwait in January to work on a project as an engineer, and February saw me continuing that daily grind. I continued working until the 22nd, after which I flew back to the Netherlands. In the meantime, I was working a lot. It seemed like the more I worked, the less happy I became. Was my work really the only factor to blame? That’s what I want to find out.

So as you can see, my happiness was all over the place. The chart really amplifies how I felt at the time. I was a mess in every single way. I was slowly shutting down: I couldn’t enjoy the simple things in life anymore. Or at least, these moments of joy were very brief and far in between. I even experienced my worst day ever during this period.

I’ll show you exactly what went wrong during this period, after showing you all the data of the month.

So I continued to work in Kuwait. The project progressed at a fast pace and it was always busy. Work sucked up all my energy. My days were long and my personal life suffered because of it.

In the meantime, I lost access to all my hobbies when I was in Kuwait. I suddenly had no guitar to play on at night, no more friends or girlfriend to have fun with, no more video games to take my mind off the work, you get the idea. I lost access to the biggest sources of my happiness.

My only run in Kuwait

To add things up, I wasn’t even able to run outside. I had challenged myself to run more in 2015. Heck, I even wanted to sign up for a marathon soon. Unfortunately, I had to postpone all these plans.

Of course, I did try to run outside once. It was still relatively cold at night, perfectly fine running weather. It all went nicely, until I passed an old abandoned building site. I ran right passed it and everything seemed to be okay. But then suddenly, I heard 2 dogs fiercely barking at me. I wasn’t shocked right away, I had dogs bark at me lots of times before. But when they started sprinting towards me, I started to feel a little nervous.

They were approximately 50 meters from where I ran, and they were closing the gap very quickly. At this point, I was already sprinting like Hussain Bolt. They can’t be that fast, I thought. When I looked back, I saw that they were within a couple of feet of me and looked like they were trying to bite my ass. That was the moment I really started to worry about my well being. When they got right on my heels, I started screaming for help. “AAAH HELP”. Yep, that’s what I did. Luckily, that’s when they suddenly stopped chasing me.

I must have screamed like a little girl. I couldn’t remember the last time I screamed like that. Now that I revisit this experience, it actually sounds quite embarrassing, but at the time I really thought I was about to be turned into a nice human main course. This entire scene probably didn’t last more than 30 seconds. The running data clearly shows this intense period…

The fact that I was running a loop and had to pass the same old building site again made things worse. The same greedy dogs decided that there would be a round 2. Well, they got what they wanted. They chased me down a second time. At the end, I was screaming for my life, again!

It was the first, and last time I tried to run in Kuwait. I had to cross that hobby off my list as well…

Luckily, I had the Sundays off! I got to visit Kuwait City, which was a very nice change of pace. It almost felt strange to me. Here I was, stressed from work and generally not feeling too happy, while everybody in the city seemed to be enjoying themselves. I was so focused on the negative parts of Kuwait, that I was actually surprised to see that Kuwait City is actually very beautiful and nice.

I was so blinded by my work and the negativity, that I couldn’t fully grasp the fact that Kuwait is still a beautiful country.

Anyway, I had already started to count the days until I would fly back to the Netherlands again. When the day arrived – the 22nd of February – I was mostly relieved that it was over and looking forward to doing all my hobbies again.

Even though this month was by far the worst month I had experienced to date, there were still a hand full of positive factors on my happiness.

The biggest positive factor in February, 2015, was my relationship. After a rough start of our long distance period in January, we fixed the issues and continued to enjoy each other. Most of these positive factors actually occurred after I got back to the Netherlands. I was happy to be back with her after struggling in another country for some time.

“I found a place where I could blow off some steam”

The second best contributor to my happiness was exercising. Even though I wasn’t able to run outside, I still got a some movement via exercising in a small gym. Mind you, I’m not your standard gym bloke. I love running, but I think pulling weights gets boring fast. Still, the effect on my happiness was positive, because I at least found a place where I could blow off some steam. A place for me to get lost in my thoughts, without having to think about work. It was nice.

There weren’t many other big positive factors this month. It confirms the low happiness ratings, as I was just not feeling too happy at the time.

The biggest negative happiness factor was obviously my work. I was doing the same job, day in, day out, for 12 hours a day, with only 1 day off. It got nerve wrecking and frustrating pretty fast.

I honestly liked my job at times. But I think that no matter how much you initially like your work, after doing it for such an extended duration, you will grow tired of it. It happened to me, anyway.

The many hours of work kept me from doing stuff that I enjoyed at the end of the day. There were still only 24 hours in a day, you know. I decided to cut back on sleep in order to still have time to do the stuff that I enjoy, like exercising and watching a movie. The lack of sleep eventually lowered my energy levels even further.

I would return to my apartment after a long day, and feel too tired and broken to have a positive mindset about the entire situation.

In addition, my immune system suffered as well, which resulted in a small fever at the end of a long week. It was a mixture of negative factors, all cooperating to decrease my happiness.

“My relationship wasn’t affected by this”

Luckily enough, my relationship wasn’t affected by this. We got off to a bad start in January, but recovered quite well. Even though we were far away from each other, she could still have a positive influence on my happiness.

Anyway, I think I have discussed this shitty month enough by now. I was back in the Netherlands in the end, ready to get my happiness up again. I will discuss whether or not I succeeded in the next Monthly Happiness Report. If you have any questions about anything, please let me know in the comments below, and I’ll be happy to answer them!

Positive Changes In Life: Actionable Tips On Being Happier Today 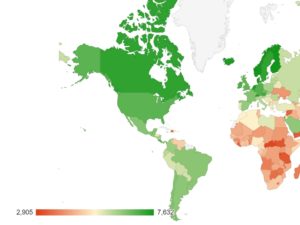