August was one of the best months of my life. I had been tracking my happiness for almost three years by this time. August was easily one of the happiest times for me. I enjoyed my usual life in the Netherlands, and eventually went on a perfect holiday to Macedonia with my girlfriend. It was an amazing time, and I was very happy as a result. I want to show you how I tracked my happiness during this period in this Monthly happiness report!

The monthly average happiness rating of August was a 8,13, which was great!

I’ve gone back and checked it. According to my happiness tracking journal, I was only happier during 2 previous months. My average happiness rating was an 8,20 when I was traveling through New Zealand, and an 8,14 when I went on a holiday to Croatia with my girlfriend.

Let’s take a better look into the happiness ratings of August, 2016.

The chart below visualises exactly what my happiness ratings looked like throughout August, 2016.

This chart shows you my ratings, including a rough idea of what was moving my happiness at the time.

You can learn 5 things from this graph:

I want to further discuss these events in this post! I’ve been tracking my happiness every day, and want to show you exactly how these things influenced my happiness at the time. 🙂

My happy life in the Netherlands

I want to show you another excerpt from my happiness tracking journal, to give you a better idea of what my life looked like at the time. The following excerpt was written on the 1st of August, at midnight. I rated this day with a 8,25.

I will be in Macedonia in three weeks. 🙂 Today was another day of work. It’s a little quieter at the moment. Luckily.

I received my Garmin running watch today. I just ran my first long distance run with it. In order to see what it could do, I wanted to maybe run 21.1 kilometers, in a best case scenario, depending on how I felt. However, I took a wrong turn and entered a much MUCH longer loop. I eventually ran 28.6 kilometers in 2:36:00. Great marathon pace, which is nice. It went fucking great!

I’ll meet two of my friends tomorrow in Utrecht after work, which is nice. However, I do think that I don’t have enough time for all the things I want to do. I’ve not seen my friends in a long time. I also feel like I’m not spending enough time with my family. And then there’s also my music which I want to finish! My girlfriend is away for three days now, so that actually gives me more time now lol.

Frodo (our family dog) sort of tried to take a bite of another person again today. Nothing too serious in my opinion. But it’s game over for him if he ever does it again. That would be absolutely terrible. I don’t know how I would react to that. I hope we can prevent that from happening. Anyway, I have to go to sleep now. Bye!

As you can see, I continued to enjoy my regular life in the Netherlands at the start of August.

Work was fine. A little stressful at times, but overall pretty nice and actually enjoyable.

I continued to run a lot in anticipation of my third marathon. And I was looking forward to my holiday at the end of August.

You can see that I was really happy during this time. Everything was going just as I wanted.

Except for the incident with our dog. He is a  nervous dog, but actually very sweet and kind in an environment in which he feels comfortable. But if something scares him, he will panic and bite whoever did scared him. He had already done it before. It would crush me if something like that would become the reason for putting him down.

Other than that, I really enjoyed my life at the time.

My perfect holiday to Macedonia

On the 24th of August, my girlfriend and I flew to Macedonia for an 8 day vacation.

We had never visited the country, but knew the weather and nature was well worth a visit. The country is landlocked, but there is a beautiful lake in the South, near the borders of Greece and Albania. It’s Lake Ohrid.

This area is absolutely stunning. We enjoyed a lot of our days by simple exploring the beautiful towns in the area. There is a lot of history in this part of Europe. The people are very proud of their country, and super friendly to visitors. My girlfriend and I greatly enjoyed our time in this area of Macedonia.

Another great reason to visit Macedonia: it’s very cheap compared to similar countries in the area!

We didn’t have to spent a lot of money in order to fully enjoy our visit. Our expenses were relatively low, even though these expenses greatly influenced my happiness!

After a couple of days, we rented a car to further explore this beautiful part of Europe!

We circled the lake, and went to the capital of Macedonia: Skopje. The roads were decent enough, and the nature was absolutely stunning.

On another day, we crossed the border to Albania.

Albania was definitely something else!

The roads were in worse condition, the locals were less used to tourists and the capital Tirana felt a bit like a beehive.

But the country was beautiful in its own right. The landscape was mostly untouched by humans, and there was more than enough beauty to witness.

Our one day road trip to Albania became one of the best days of our vacation.

On the last day that we rented our car, we crossed the border to Greece.

Even though the Northern province of Greece -Kastoria – is not as rugged and spectacular as Macedonia or Albania, it was still a joy to explore this little part of Europe.

After a couple of hectic days, we enjoyed driving on the freshly paved roads of Greece and paying with the Euro again 🙂

We explored the area around Lake Kastoria. There is a nice and quiet town on the lake, in which we enjoyed a perfect Greek dinner. At the end of the day, we drove back to our apartment in Ohrid through a blazing thunderstorm. We were luckily not affected by it 🙂

Our 8 day holiday in Macedonia was close to perfect, and both my girlfriend and I were as happy as ever. Let’s have a look at how this influenced my happiness factors!

The chart below shows all the positive happiness factors of August, 2016.

I was really happy throughout the entire month, and our holiday in Macedonia only amplified my happiness.

My relationship was great at the time. I was really happy with how my girlfriend and I enjoyed our time together.

The chart below shows all the negative happiness factors of this month.

My days were influenced by negative happiness factors only six times!

I haven’t checked it, but this might have been a personal historic low. I don’t believe I ever recorded a month with this few negative happiness factors.

It’s proof. I was incredibly happy at the time.

If only my entire life could be like this, right? 🙂

That’s it for this month! August, 2016 was a great month for me. It was one of the happiest months of my life, and I hope this monthly happiness report has shown you exactly why that was. 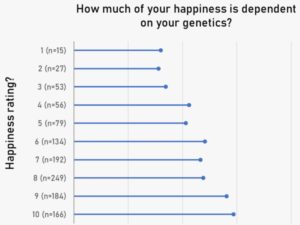 How Much Of Our Happiness Is Genetic? (New Study Results!)

How To Be Happy Everyday [& 15 Powerful Methods] 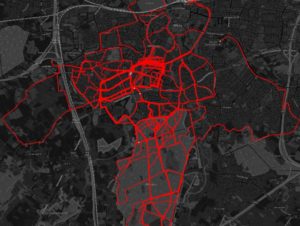